We, the people, still believe that our obligations as Americans are not just to ourselves, but to all posterity. We will respond to the threat of climate change, knowing that the failure to do so would betray our children and future generations. Some may still deny the overwhelming judgment of science, but none can avoid the devastating impact of raging fires, and crippling drought, and more powerfu 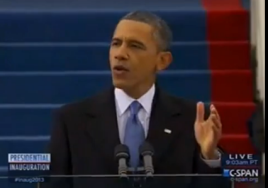 l storms. The path towards sustainable energy sources will be long and sometimes difficult. But America cannot resist this transition; we must lead it. We cannot cede to other nations the technology that will power new jobs and new industries – we must claim its promise. That is how we will maintain our economic vitality and our national treasure – our forests and waterways; our croplands and snowcapped peaks. That is how we will preserve our planet, commanded to our care by God. That’s what will lend meaning to the creed our fathers once declared.

Bravo, and about time.

Too bad he didn’t link climate change and MLK. It takes just a bit of imagination to see that climate change is a civil rights issue of the first magnitude. No one has the right to impose a degraded future on anyone else to maintain a lifestyle. And I’m not talking about imposing it on generations so far in the future that it’s impossible to link what might happen between now and then. I’m talking about imposing it on any and all of us under 65—or even older if we’re very unlucky. Yes, the risk is high that changes are that imminent.

Climate change obstructionism has a lot in common with supporting slavery. An egregious first-order moral wrong (e.g., slavery or climate change inaction) is justified with second-order moral arguments (e.g., the economy or a traditional way of life). The difference is that the obstructionists aren’t slave owners. They aren’t personally injuring specific human beings. But like the crinolined belle in the Savannah drawing room whose daddy may only have been a banker or a whip and chain supplier, their privilege and well-being derives directly from the social and economic structure they live within and perpetuate.

As does ours. Of course, there are degrees. It’s one thing to spend millions to defame climate scientists, deploy misinformation, and elect fellow obstructionists. It’s another to carry on with “normal” life, to wait for someone like Obama to lead us, simply because the issue is so overwhelming we can’t see what an individual can do to make a substantial difference.  As I wrote last week, we can’t scold ourselves for being born into this fossil-fueled world and shame ourselves into giving it up as if it were a bad habit.

But, as with slavery, or segregation, or repressing women, or pollution, or accommodating second-hand smoke, we can decide we’re not going to do this anymore. That’s where religion and inspirational figures like Reverend King can really help. Once that commitment is abroad, then political leadership can channel the commitment. It’s impossible to lead people where they don’t want to go.

I think most of us want to go there. No one reading this wants to bequeath a near-future to their children (let alone themselves) that’s anything like the one in my dystopian novel, A Change in the Weather. Most of us are ready for the WW2-style commitment it will take to keep that from happening. We’re ready to pay taxes for Manhattan Projects to develop new technology, We’re ready to pay taxes for Marshall Plans to reconfigure our economy, financial system, and infrastructure. We’re ready to pitch in with higher levels of conservation and to contribute to the environmental equivalent of war bonds.

But religion is a two-edged sword. It can also be used to justify the status quo—which is what happens in my book. “Climate change is God’s will” is no different than “The superiority of white men is God’s will.” Worse, as the weather gets weirder, many will see manifestations of the Book of Revelations. Let’s be vigilant for those distortions. We don’t need a religious militia like the Order of the Eagle and Cross offering to step in to “help” keep God’s order as they imagine it.

That’s why I think of climate change action as a civil rights issue. No matter our religious beliefs, everyone can understand that no one has the right to impose inescapable poverty and misery on another so that they themselves can live lavishly. It’s simple ethics: do unto others.