Silly Me, the Climate Alarmist

I’ve been spending some time looking at Dr. Judith Curry’s blog, Climate Etc. It’s a haunt for climate skeptics. That appears to be its purpose—to entertain challenges to the theory of anthropomorphic climate change in an objective manner.

Many of the comments appear intelligent and well-reasoned, within the narrow scope of the chosen topic. And I think Dr. Curry is trying to be even-handed, although some of the comments carry the tone of impatience and scorn that marks much skeptic argumentation.

But I can’t quite put my finger on the point of most of the discussions.

Largely, they seem to be of the angels-on-the-head-of-a-pin variety: excruciating, at-length micro-parsings of highly delimited sub-issues, some scientific, some sociological, some political. There doesn’t appear to be any outright climate change denial, but the drift is, people who are concerned about an imminent climate disaster are alarmist. The comments argue from fear that we might do anything to upset the social or economic status quo. To many of the commenters, it’s not clear how bad the problem is, or if there’s a problem at all.

One thing the commenters don’t do is offer any comprehensive theory that ties together the macro phenomena of the disappearing ice cap, the rise in atmospheric, oceanic, and terrestrial temperatures, the retreat of the glaciers, the lengthening growing seasons, the acidification of the oceans, and the distortions in the jet stream, let alone one that’s more compelling than the greenhouse gas hypothesis. If that were the point, I could understand and embrace it. 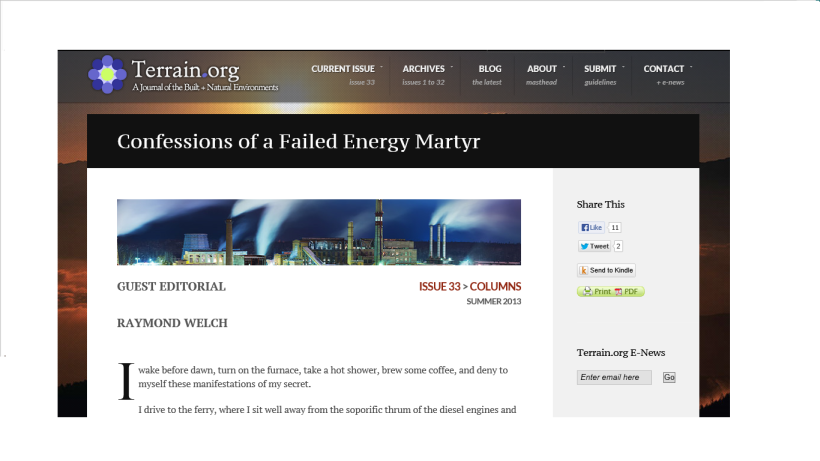 I’m sure some of the more derisive of them would find my Terrain essay contemptible. My pessimism about solving the climate crisis in the face of this contempt is a central theme of the piece.

None of the skeptic quibbles are on the same scale as the planetary manifestations, physically or temporally. The Arctic ice cap has lost 80 percent of its summer mass in less than 40 years. Does one really have to debate whether this is alarming, or that it is very likely to have grave implications? The only way it couldn’t is if there were an alternate explanation that comprehended the other phenomena. At heart, the skeptics are almost debating whether CO2 is a greenhouse gas, or whether humans have increased the atmospheric content of it by 40 percent over the last two centuries. In other words, their arguments fly in the face of the obvious. It’s still denial, tricked out in thin, skimpy veils.

At the end of my essay I say, “I would love to be proven spectacularly wrong, grandiose, and obsessive, to have wasted the balance of my life in thrall to a false and grindingly self-destructive idea. It is a humiliation I would welcome.” But quibbles about how much methane is venting from the tundra or whether Paul Erlich should be taken seriously don’t disprove that we’re disrupting the climate and melting the ice cap, or that we should do nothing about it.

If you’re interested, Scientific American has a great article on Dr. Curry’s controversial interactions with the climate skeptic community.

2 responses to “Silly Me, the Climate Alarmist”